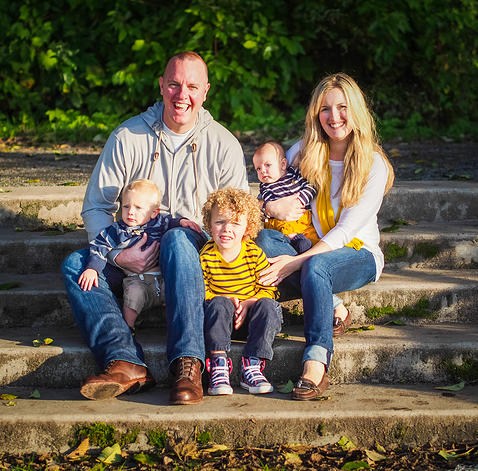 My middle child is 2 years old.  He has an older brother, our 5-year-old miracle boy who survived a near-death experience and only by the grace of God is still with us.  His younger brother just turned 1 and is a drooly, smiley bundle of snuggles.  My sweet middle boy is at that in-between age where he desperately wants to be a big boy but still needs the baby snuggles in a deep, primal way.

Every night my husband and I get everyone to bed and we are desperate for a little time together to reconnect…or even to just zone out and watch tv at the end of a long day.  And every night our little 2-year-old sneaks out of the room, down the stairs and appears suddenly between our chairs.  He is quiet.  I mean ninja quiet.  I am always startled when that curly blond head pops up next to me!  Generally, as so much of parenting can revolve around behavior modification, our approach is to take him immediately back to bed with a gentle reprimand.  It’s never fierce but it is always firm.

In a moment of weakness the other night I pulled him into my lap and asked him “Why do you always get out of bed?”  He had just started talking recently so this was my first opportunity to understand through words what was going on with him on these frustrating nights.  I asked him “Why do you always gets out of bed?” and he responded with “You snuggle me.”  That was when it occurred to me that he is always the last to receive snuggles.  It is not because he is less loved.  Any parent can tell you that they love all their kids equally.  But that doesn’t mean they always dole out their time equally.  My 5-year-old very aggressively and with great flourish and verbal ability announces that he needs snuggles.  My 1-year-old is still just a little baby so the snuggling happens automatically.  He can’t walk yet so I am always carrying him around and the snuggles just happen.  But my 2-year-old is in that awkward in-between stage.  He needs me so much but doesn’t know how to communicate it.

This was a turning point for our relationship.  The maternal bond was so fractured when I became pregnant when he was a mere four months old.  My milk dried up almost immediately in response to the hormone changes and the sweet bond of nursing was broken.  I was so sick that I would have to put him down mid-snuggle to run to the toilet and throw up.  He couldn’t have possibly understood what was happening but he knew things had very suddenly changed between us.  There was a rift there that grew and seemed insurmountable.  Then suddenly at 2-years-old he wanted late night snuggles.  What appeared to be “acting out” turned out to be him reaching out to me as our bond healed and strengthened…something hard-fought on my part and seemingly unattainable.  Kids are so much more forgiving than adults.  He had forgiven me and was reaching out for something.  He had to take it late at night when everyone else was in bed and he could have the undivided attention of both his parents for the first and only time each day.

This changed not just the way we approached these late night ninja visits but also our attitude toward them.  Now we snuggle for a while and I ask him about his favorite part of the day, quiz him on letter sounds (his current favorite game because older brother does it), and tell him that he is loved and treasured.  He goes to bed after that with a peaceful smile and stays in bed.  I wonder if this will be something that sticks with him, if he will remember our late-night covert snuggles and it will be a treasured memory from his childhood that he tells his kids about.  I wonder if it will be the thing that repairs the brokenness in our relationship.  I think this shift is already happening and I am so grateful.  I  am so grateful that my little ninja baby sneaks downstairs for snuggles…for in these moments may lie the foundation of our new, healed relationship.